Discussing the future of translational medicine at ON Helix 2014

The ON Helix 2014 conference, hosted by One Nucleus, brought together a distinguished list of individuals to discuss the opportunities and challenges surrounding translational research here in the UK. The conference provided us with a plethora of novel data to sink our teeth into as well as a good amount of lively discussion to top it off. From labs to boardrooms, ON Helix had something for everyone. Here are some of our highlights.

Learning from the past

After Harriet Fear from One Nucleus had welcomed us all, Astra Zeneca’s (AZ) Mene Pangalos kicked things off with a look at how the company has managed to incorporate past experiences into identifying potential drivers of success. This has led to development of what they term the ‘5Rs framework’: Right target, Right tissue, Right safety, Right patients and Right commercial potential; all under the ‘6th R’ of Right culture. The framework has proven successful for AZ in tracking progress, as well as highlighting opportunities and weaknesses along their drug development pipeline. AZ are also looking beyond the scope of their own in-house research teams and really pushing open the doors of collaboration, working closely with numerous universities and biotech companies, in the hopes of advancing ground-breaking research. We're excited to see how this open and innovative approach to drug discovery will improve medicine ­– watch this space!

Shaping the future of toxicological testing

Stephen Minger, Chief Scientist of Cellular Science at GE Healthcare, walked us though the exciting – and occasionally contentious – area of using cardiomyocytes for toxicological testing in drug safety. The problem with current toxicological testing approaches is that they rely on animal models to reflect human responses. The testing is typically carried out at maximum chemical dosages and false-positives are often generated as a result of testing multiple endpoints. According to Minger, many of these core experimental procedures commonly used haven’t progressed for more than 40 years and are in need of a bit of a shake-up.

Minger’s presentation served to raise awareness of this situation via an array of experimental data. He showed that Cardiomyocytes, generated from H7 human embryonic stem cells (hESCs), are amenable to an array of new screening and imaging technologies, and have been shown to be more sensitive in comparative pharmacology Tox tests than other cell/model types (rabbit PF and canine PF). However, for a variety of reasons, they are still not widely employed.

The future of toxicological modelling seems to lay beyond just the development of additional cell models (hepatocytes, neurons, etc.). There is also a need to move away from the often uninformative nature of animal model systems, as well as the expansion of available genomic diversity though the importation of ~100 existing hESC lines. Minger also highlighted the value offered by adapting existing high-content analysis (HCA) assays in order to improve the data quality and throughput of current cell models, and render then more amenable to screening approaches.

The bias of drug targets

It wasn’t just toxicological testing that was on the list for a shake-up: John Overington, a computational chemical biology Team Leader at EMBL-EBI, explained the benefits of Mendelian randomization over the standard randomized clinical trial (RCT) for drug trials ­– delivering better patient stratification through the creation of ‘patient genotype barcodes’! Overginton also highlighted that only 1.6% of the human genome is currently seen as a drug target, and over 53% of all drug efficacy targets are from just four families: rhodopsin-like GPCR, ion channels, nuclear receptors and protein kinases. This slightly myopic view of drug targets presents a significant challenge for those looking for novel ways to treat disease.

We were also introduced to the ChEMBL database, the world’s largest primary public database off medicinal chemistry data, and SureChEMBL, an evolution of ChEMBL following their acquisition of SureChem from Digital Science. SureChEMBL provides open access to over 15 million chemical structures, patent literature 2 to 3 years ahead of publication and automatic chemical structure extraction from any full-text patent – overnight! This will undoubtedly serve as an indispensable resource to researches around the globe.

While eminent thought leaders such as Professor Sir Tom Blundell, Sir Gregory Winter, Hermann Hauser CBE and Sir Michael Rawlins were conducting a lively discussion during the day’s first panel session, some of the debate spilled over onto Twitter. Social media is rapidly changing the way attendees interact at conferences. At ON Helix, the hashtag #onh14 allowed those in the audience to share their thoughts and highlight their favourite takeaway point from presentations and panel discussions, while connecting with each other to discuss particularly exciting or controversial points. As you would expect, our team was an active part of the online discussion, something that was made even more interesting when I bumped into a few of my fellow Twitter users in the coffee session later on, and the conversation continued! 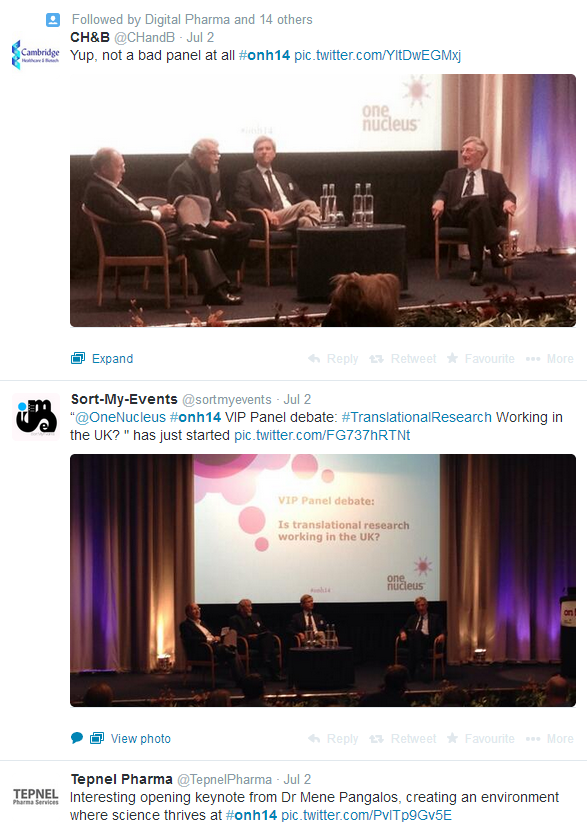 Looking back and looking forward

The ON Helix conference was great insight into the advances, challenges and future of translational research. It’s clear that there have been boundaries pushed and boundaries broken, but there are still hurdles to overcome: the development of new techniques and the revision of older ones in the ongoing quest for better therapeutics; the slow but clear rise of personalised medicine; the changing models of drug discovery; and the need for interdisciplinary partnerships to better translate knowledge into treatments. With new collaborations being formed and new technologies being developed, this is a fascinating time where the gaps between academic and industrial research are being bridged more effectively than ever before. While there is still some way to go, we’re excited to see how these new and evolving ‘collaborative models’ will impact on the future drug development.

One place this is sure to be discussed in detail is at next year’s ON Helix event, taking place on 14 July 2015 – we’ll look forward to seeing you all there!