So much science, so little time (Autumn 2019 edition). 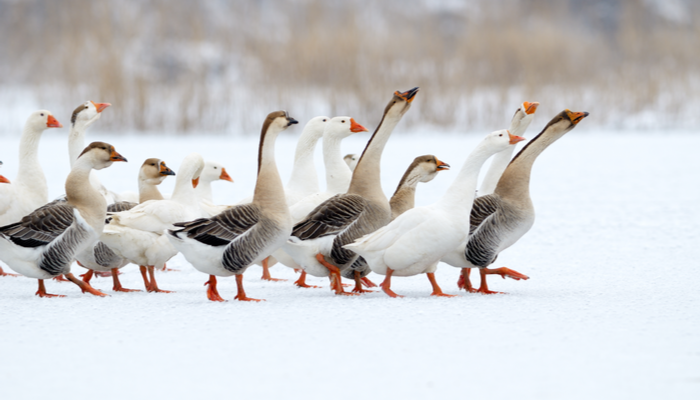 As summer fades into a distant memory and the central heating kicks in, it’s easy to slip into hibernation mode and lose track of the latest scientific and medical breakthroughs. So, to keep you informed and entertained this autumn, we’ve put together our favourite science stories, including exciting award news and a rather shocking discovery. We’re sure you’ll find this edition electrifying!

Make like a goose and head south for some winter sunshine

As the temperature starts to dip, wouldn’t you love to beat the winter blues and migrate south for some much-needed sunshine? Bar-headed geese (Anser indicus) are renowned extreme-altitude migrants, flying over the tallest peaks of the Himalayas for much of their annual migration. Wing-flapping is metabolically costly—especially at high altitudes—so specialisations that allow these geese to soar and maintain such great heights is a source of fascination to scientists.

Using a wind tunnel to simulate high altitude, researchers at NASA studied specially trained geese. They found that with only a modest increase in heart rate, the geese could significantly increase oxygen transport. What’s more, at high altitudes, the birds’ metabolism slowed as oxygen levels decreased, despite them maintaining a sufficient wingbeat to keep aloft. While these advantages might make it easy for the geese to head off for a warm and sunny break, if you want to dodge the worsening weather, you might be better off checking out some commercial flight options!

As the colder months approach, the common cold is rampant and other respiratory infections are on the rise. But what can we do to avoid these dreaded lurgies? Although it’s tempting to huddle up indoors and indulge in comfort food, it’s particularly important to stay active and eat well. It’s increasingly recognised that the immune-boosting effects of a healthy and varied diet are associated with microbiome diversity, which can help you fight off winter illnesses, but what if your microbiome got depleted?

In a recent study, scientists showed that antibiotics caused an alarming 10,000-fold depletion in microbiome populations and that it takes over a year for them to recover—providing further evidence (if needed) of the perils of antibiotic overuse. More worrying still, individuals who hadn’t received the flu vaccine for at least three years and had taken antibiotics showed lowered responses to the flu vaccine and demonstrated signs of systemic inflammation normally seen in elderly people. As well as supporting good antibiotic stewardship, the findings of this study drive home the importance of keeping up with regular flu jabs.

Chimeras are mythical creatures created from the parts of various animals—the head of a lion, the body of a goat and a serpent for a tail. Let’s just say you wouldn’t want to cross one on a cold dark night!

The similarly named chimeric antigen receptor T-cells (or CAR-T cells for short) are so called because they also include extra parts: on their surface they have modified receptors designed to attach to cancer cells and kill them. Ground-breaking CAR-T cell immunotherapy is already approved to treat a range of haematological cancers and lymphomas, and new research highlights how molecular appendages can be used to track them in the human body!

Coincidentally, this autumn also saw the prestigious Lasker Award for Basic Medical Research presented to immunologists Jacques Miller (Walter and Eliza Hall Institute of Medical Research in Melbourne, Australia) and Max Cooper (Emory University in Atlanta, Georgia) for their trailblazing discoveries of T-cells and B-cells. By identifying two distinct classes of lymphocytes, the pioneering pair laid the foundation of our understanding of the adaptive immune system—and the field of immunology as we know it. It’s hard to comprehend how many lives have been saved with these breakthroughs!

Putting the CAR-T before the… mouse?

Heart disease is the leading cause of death globally, and with that, it carries a huge burden both economically and socially. Unfortunately, despite the wide availability of evidence-based therapies like vasodilators, angiotensin-converting-enzyme inhibitors and beta-blockers, the 5-year heart failure mortality rate is still a staggering 50%.

Taking a fresh approach, researchers have investigated immunotherapy in a mouse model of cardiac fibrosis by targeting CAR-T cells at a protein transcript expressed in damaged hearts, with encouraging results. In just four weeks, the treated mice showed significantly less fibrosis than the untreated animals. Even more impressively, at eight weeks, five of the seven treated mice showed virtually no fibrosis. It’s this alliance of multidisciplinary research and innovation that reminds us at BioStrata of why we love science so much.

Humans have been captivated by Electrophorus electricus since its discovery by Linnaeus 250 years ago. The eel’s capacity to generate strong electric discharges has inspired the design of electric batteries, as well as the development of protocells, using nanoconductors and capacitors, modelling animal electrogenesis. Not bad for such a slippery character!

Due in part to their large size and specialised morphology, the electric eel had always been regarded as a lonesome species. However, new research suggests that they’re a bit more diverse than previously thought, and that ‘the’ electric eel actually comprises three distinct species. One of these new species recorded an electrifying discharge of 860 V, well above the 650 V previously reported for Electrophorus, making it the strongest living bioelectricity generator. These findings show how easy it is to overlook species-level diversity, even in a widespread and very conspicuous species!

See you next time for our Winter edition! In the meantime, if you want to keep up to date with the latest life science and marketing news, then why not subscribe to our monthly newsletter?